Edited and published by Rose Buckingham and Marcus Foster

Last term Crowcombe and Stogumber participated in tag rugby tournaments. We had a chance to go to Twickenham. Unfortunately we didn't win enough matches. It was at Huish playing fields (their grounds were HUGE(!)). Daniel (year 2) was as fast as a bolt to get a try. A try is when you run from one side of the pitch to the other and place the ball on / over the line.

During that term I improved my co-ordination skills which really helped my leadership and I grew faster in my running. I chose tag rugby because it was the most fun I’d had in ages with both schools. I recommend tag rugby because it is great fun and perfect for children between the ages of 7-10. 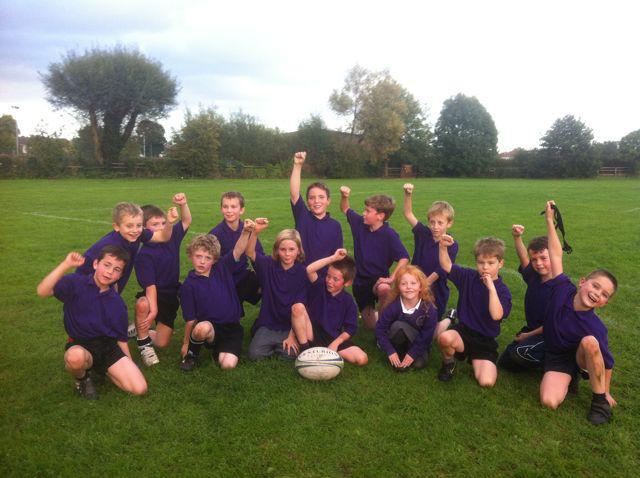 Archery and fencing (In Taunton)

On Thursday the 10th of July 2014 the whole of class 2 in Stogumber, including Mrs James, went to Castle school in Taunton. When we were there we did archery, fencing and teambuilding. I enjoyed archery and fencing the most. The whole class stayed there all morning. After we were really tired and had zero energy.

First of all we did fencing. We all thought we were going to swordfight each other, but we didn’t. First of all was a move where we had to stick our swords up in the air and our right hand behind your head and left in front of your head. This was if you were right handed. If you weren’t you would do the opposite. The second was push forward and slice diagonally through the body. Then turn around the sword and slash back up again. Now slice through the middle of the body then you opponent should be dead.

In archery we were firing bows at a balloon. The last shot was lucky. I missed every time by at least two meters and I was so disappointed. Everyone was laughing. Then I started to laugh as well. When I was laughing I was aiming at the same time. Then I laughed so hard I slipped and let go of the bow…

Then I heard a massive bang and the balloon popped. I had hit it!!!!

The Christmas play is a really important time of the year because we are celebrating the birth of Jesus.
It is based around a nativity play that the class one children act out.

The class 2 children get to write their own script (it's usually something madcap and exciting like James Bond or Dr. Who saving the day!).
This year's play was based in a fairy wood. The three heroes, Billy (Dan), Karate Kid (Cameron) and Farm Boy (Ryan) had to rescue three stags that had been kidnapped by the Evil Elf.

I enjoyed it because you learn not to be scared of going up in front of hundreds of people.
I have defeated my fear of being shy.
I would highly recommend doing the Christmas play because you get to write it yourself, you learn loads of new things and you beat your fears. 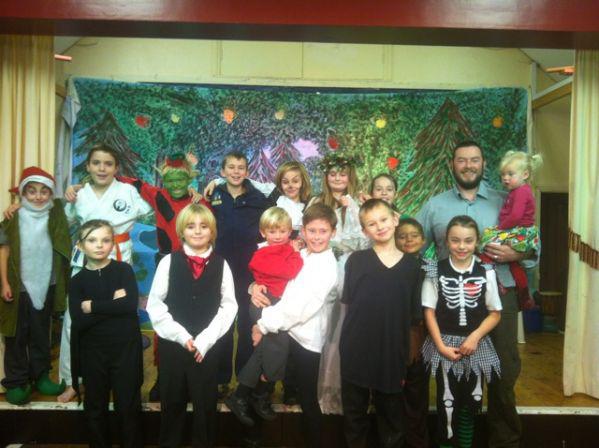 The whole of class 2 Stogumber school went on an Anglo Saxon day which was in Dunster (we called it the Dunster invasion).

We went there to learn more about Anglo Saxons; it was awesome.

It was in the middle of spring. This is what happened:

When we arrived at Dunster we met two lovely Anglo Saxon villagers (not really - they were called Roy and Jan Harbour). Then we set off to defeat the nasty scottish champion (Steve, who was actually Mrs James' husband).

We started hearing wolf noises and screaming; it was scary but exciting at the same time. We saw an E rune  (which means eostre) marked on a tree. The aim of the mission was to protect Eostre from the bad people who were trying to ruin Spring. 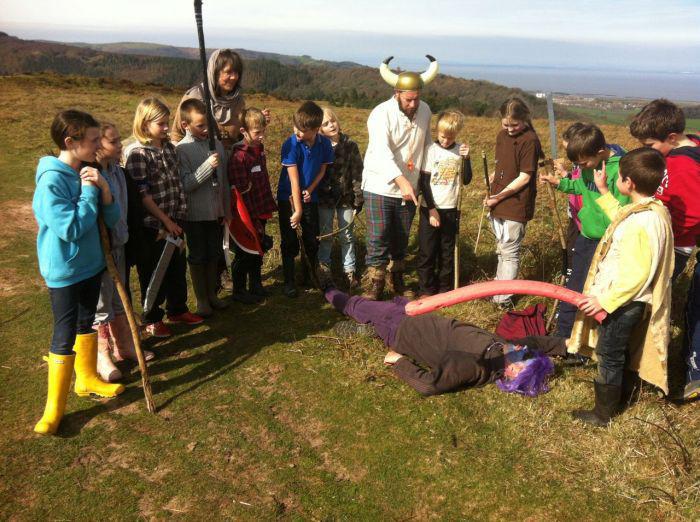 Forest school
Every Monday of the second half of the term the whole of Stogumber School go outside the classroom. The places we go are: the Beacon Field and Goblin Forest.

We normally build dens and identify animals and plants. One time we made our own goblins with natural materials.
I enjoy helping the little ones and forming work with them. I’ve learnt lots of skills like: working on my angles by making the travois, building structures for our dens, landscaping the land and much more.
I recommend forest school because it gives you a chance to work with the youngest of our school and it is lovely to get out the classroom and learn outside.

Our last tournament was on the 10 of July. Stogumber school took part in 3 cricket tournaments. Only one  was called off by rain. Our team played really well and we won about ¾ of the games. I really enjoyed it because we had a lot of fun when we were playing. I improved my accuracy on my bowling and I have improved my strength on batting. I scored one hatrick (that means 3 wickets in a row). I defeated my fear on batting because I used to not slog the ball. But now I am contently hitting fours and sixes. My highest score is 28 runs. No one has hit more than that.

On the 3 and 4 of July we had leavers camp hike. It was really fun. I brought my stunt kite with me. It was an ankle twisting, people panting, incredible climbing and feet throbbing adventure. When we got on top of the Quantocks we could see birds gliding across the open scorching sky.

And the best bit was when we got to the bottom of the valley and we got to the sailing stream. We all (except the girls) dunked our heads in it to cool down after our 7 km walk! After that we plodded
back to camp. When we got back I helped get Mr W get his hammock up and I also helped Mrs James and Josh get their tents up. I helped set up the BBQ up and also I had a wonderful time! Thank you everybody that co-operated in the hike!

The whole of Stogumber School went to Pixford Orchard. At the Orchard we have 7 trees. We picked the apples, put them in some crates and then we put them on the bus. Because the teachers are so nice they let us have some apples off our trees for a snack.

I learnt lots of the names of apples like Granny Smith and Johnagored. I enjoy the day because Miss Shopland bought me a jar of honey (it was really nice). I would recommended it because it is a great learning experience.

Residential (Rock and Rapid)
On the 9th of June Class 2 in Stogumber went on a Residential at Rock and Rapid in Devon for three days and two nights and it was brilliant. On the first night at the Residential no one got to sleep apart from Tiggy who was snoring.
On the last day we went to the climbing wall and got some climbing kit on and started our climb. Kyra Alysha and I were all on the same wall. I reached the top and so did Kyra in a way. Kyra climbed half way to the top but wanted to come down so Simmo (a climbing instructor) pulled her right to the top and Kyra was screaming with nervous excitement!
After the Residential I was sad that we had to come back but I was glad to see my little sister and brother again. I conquered my fear of heights while at Rock and Rapid. On Monday we wrote in our Diaries about what we did there and I would definitely do it all again. 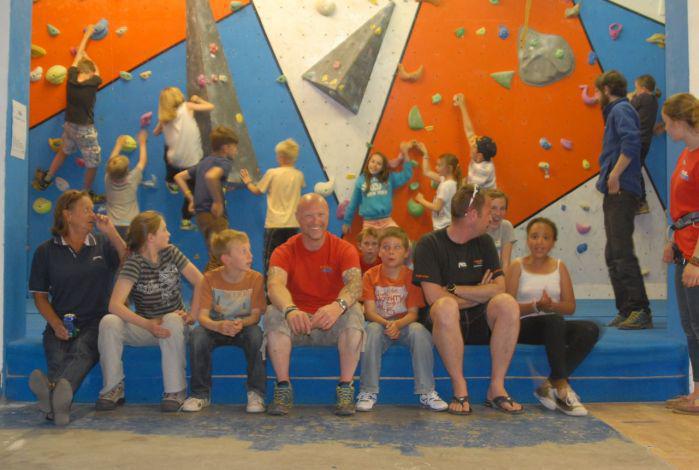 SATs WEEK
SATs week was scary, exciting and nerve-wracking.
Every morning for a week the year fives had to carry tables and chairs into the village hall and set up for the SATs that morning.
The year fives were with Mrs Yates and the year sixes were with Mr Wedderkopp.
For the whole of the morning both years worked very hard until the afternoon came. You see in the afternoon we were allowed to choose an activity that we all enjoy!
The last afternoon was the best; we had a WATER FIGHT!
We were all given 2 plastic cups and a big bucket of water (some of us had water pistols too).
Then we got started…
We all charged for the bucket, filling up our cups then throwing the freezing, ice-cold water down someone else’s back. After that just stand back and listen to them shriek!
It is amazing how many screams of shock you hear!

Stogumber fete
On Saturday the 12th of July Stogumber fete took place in the Church field, next to the village hall.
All the games were run by the school (PTA) and the village people.
I mostly played on a bike and watched the dog show. I bought a couple of drinks and won some coconuts on the coconut shy.
I really enjoyed catching up with our friends.

These are the games that were at the fete:
Coconut shy,
Tombola,
Raffle,
Smack the rat,
Beat the keeper
And the Human fruit machine.

Unfortunately not the ones with chocolate chips.

Some cookies are necessary in order to make this website function correctly. These are set by default and whilst you can block or delete them by changing your browser settings, some functionality such as being able to log in to the website will not work if you do this. The necessary cookies set on this website are as follows:

Cookies that are not necessary to make the website work, but which enable additional functionality, can also be set. By default these cookies are disabled, but you can choose to enable them below: